The Frontier Attitude of ‘Journal of Religion & Society’ 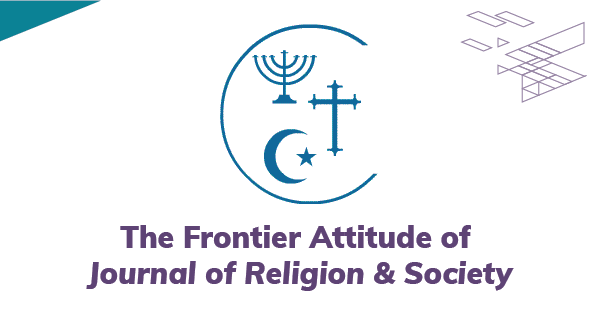 At the turn of the millennium, two colleagues at the Kripke Center at Creighton University embarked on a project to meld their scholarship interests with their passion for the newly emerging World Wide Web. The result: the Journal of Religion & Society.

Atla Product Specialist Cristina Ochoa recently spoke with one of these founding visionaries and current Director of the Kripke Center, Dr. Ronald A. Simkins, to learn more about the genesis, evolution, and dynamic lifecycle of the journal.

In 1998, Dr. Simkins became the director of the Kripke Center at Creighton University, a center dedicated to fostering scholarly work at the cross-section of religion and society, with special attention given to promoting understanding between and among diverse faith communities. At the time, the Kripke Center had a biannual newsletter as its main publication.

In 1999, Ron Simkins partnered with Dr. John O’Keefe to create a more substantial publication for the center, taking advantage of the great internet resource newly becoming available to them. After taking stock of the current scholarly landscape, the pair quickly realized that there was no scholarship being published on the Internet in their area of interest: religion and society. With no substantial budget readily available to them, they knew that whatever project they launched needed to be scrappy and sparing.

Simkins and O’Keefe had only just started their professional careers as the World Wide Web was coming into being. With the strong support of the Kripke Center behind them, they took on a frontier attitude and forged ahead into the universe of the internet. In addition to wanting to meld their passion for the internet with their scholarship on religion and society, Simkins and O’Keefe were guided by a principled purpose of establishing the Journal of Religion & Society as open access. They were (and are) firm believers that scholarship should be available to anyone who wants access.

Of course, making the journal open access meant no subscription model, no budget, and no revenue. Thus, as is the case with many academic journals, the Journal of Religion & Society heavily relied on voluntary labor (and continues to). However, with volunteers come great, dedicated passion. Supporters like Dr. Zachary Smith, a long-time Associate Editor, and the 25-30 Faculty Associates of the Kripke Center acting as the editorial board, not only support the journal but also help widen the support system and the sphere of influence.

They were (and are) firm believers that scholarship should be available to anyone who wants access.

As the journal was first starting out, the founding team had to actively solicit submissions. They would attend all relevant sessions at the American Academy of Religion Annual Meeting, sending invitations to papers that they found interesting. However, it wasn’t long before submissions started coming in on their own. By now, it has been quite a while since the editorial board has had to solicit any submissions at all.

When it comes to reviewing, selecting, and producing content, the process is rather conventional. Of course, the topic needs to fit within the scope of the journal; it must be solid, academic writing; and it must be something new, original, or contribute to the scholarly conversation. If an article meets these three criteria, it is grouped with others for publication three times per year (January, May, or September), all within a single annual volume. Occasionally, supplementary volumes for the Supplement Series (always collected, edited works) are published as a result of special events, symposia, or collected essays. The Kripke Center hosts interdisciplinary symposia annually, and the journal publishes the papers presented as a dedicated supplementary volume.

Many traditional book presses are more reluctant to publish these collected, edited works, so it can be difficult for some scholars to disseminate their scholarship in this format. Open access journals like the Journal of Religion & Society have the opportunity to fill this content gap and offer the scholarship freely online.

What is the academic scope of the Journal of Religion & Society? The name is meant to be descriptive.

When the journal was established, the founders realized that the area of focus encompasses nearly every topic. With a strong focus in place, the Journal of Religion & Society is a journal that is about religion, but with a particular interest in its social aspects, rather than the theological; the journal is limited to the Western religious traditions (Christianity, Judaism, Islam), or religion more broadly in a Western and American geographical context. The editorial board also accepts proposals that address the non-Western world, such as scholarship about Christianity or Islam in Africa or Southeast Asia.

One of the biggest challenges facing the journal in the next five years is the fact that current Kripke Center Director and journal co-founder Dr. Ronald A. Simkins is nearing retirement. This journal is his “passion project,” as he says, so the need to bolster current institutional support and train a successor is key.

Currently, Simkins is in the succession planning phase. He is working on getting new scholars and supporters involved with the journal while he begins to disentangle the editorship role of the Journal of Religion & Society from the director role of the Kripke Center. In doing so, Simkins hopes to foster new interests in taking on editorial roles, opening up the tightly entwined community to new voices.

He is working on getting new scholars and supporters involved with the journal while he begins to disentangle the editorship role of the Journal of Religion & Society from the director role of the Kripke Center.

The Journal of Religion & Society contributes to scholarship in its own little niche, and the Kripke Center at Creighton University plays a tremendous role in fostering and regulating this scholarship.

When asked what the lasting scholarly significance of the journal is, Simkins responds, “In addition to its published scholarship, I think the Journal of Religion & Society is a good model for an open access journal.”

Journal of Religion & Society is now available in AtlaSerials PLUS® (Atlas PLUS®).

Paying It Forward: The Interdisciplinary Mentorship Ethos of Nova Religio

Atla Product Specialist Cristina Ochoa “sat down” with Dr. Ben Zeller to talk about the journal, Nova Religio: The Journal of Alternative and Emergent Religions.
Post

Atla is pleased to announce the addition of titles now available in the Atla Religion Database® (Atla RDB®), AtlaSerials® (Atlas®), and AtlaSerials PLUS® (Atlas PLUS®).