“Religious Change, 1450-1700” Explores Impact of Religion and Print on Society 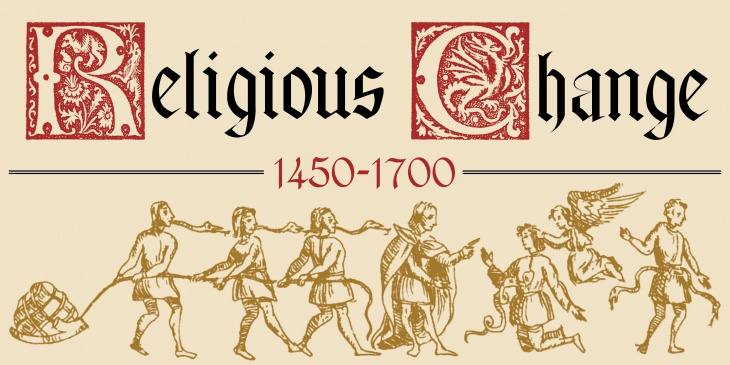 To coincide with the 500th anniversary of the beginning of the Protestant Reformation, the Newberry Library in Chicago is hosting a multimedia project, “Religious Change, 1450-1700,” which traces “how religion and print challenged authority, upended society, and made the medieval world modern,” the project’s website says.

The brick-and-mortar anchor of the project is a gallery exhibition at the library, “Religious Change and Print, 1450-1700” (opening September 14, 2017). This exhibit draws on over 150 objects from the Newberry’s collection to show how people of the time—like preachers, teachers, travelers, writers, and printers—experienced the Reformation and the rapid changes that the interrelationship of religion and print media brought about.

The library offers an official project blog, The Rite Stuff, which responds to key questions and features input from Newberry curators, reference librarians, catalogers, and other staff as well as outside scholars. The library is also devoting an episode of its regular “Shelf Life” podcast to the project. On the podcast the Newberry’s Major Projects Fellow Chris Fletcher “discusses what Luther originally hoped to accomplish with the 95 Theses, how he marketed religion to a larger audience, and why he had some regrets after empowering people to read the Bible themselves,” says the project’s website.

Other online offerings include a series of illustrated articles on the transcribing and translating of early modern religious manuscripts; religious change and print culture in the Reformation; and Italian religious broadsides. The Early Modern Conversions: Religions, Cultures, Cognitive Ecologies initiative will be taking advantage of the Newberry exhibition by holding the third meeting in its Politics of Conversion project at the library in mid-September. This public program will include a theatrical reading (and U.S. premiere) by The Shakespeare Project of Chicago of Shakeshafte, a new play by former Archbishop of Canterbury Rowan Williams. The play is set during Shakespeare’s “lost years” between his departure from Stratford-Upon-Avon and arrival in London.

Another activity open to the public will be a series of lectures, beginning in early October: “Expanding Literary Horizons: Religious Change through Cross-Cultural Contact” by Rabbi Seth M. Limmer; “Cosmopolitan Early Modern Venice” by Edward Muir and Kaya Sahin; “Luther and the Reformation: 500 Years of Book-Burning and Book-Learning” by the distinguished church historian Martin E. Marty; and “What the Reformation Did and Why It Still Matters” by Brad Gregory and Mark Noll.

The Newberry Library is an independent research library on the Near North Side of Chicago established in 1887 out of the will of Chicago businessman Walter L. Newberry (1804-68). For expanded information on the project, visit http://www.newberry.org/religious-change.