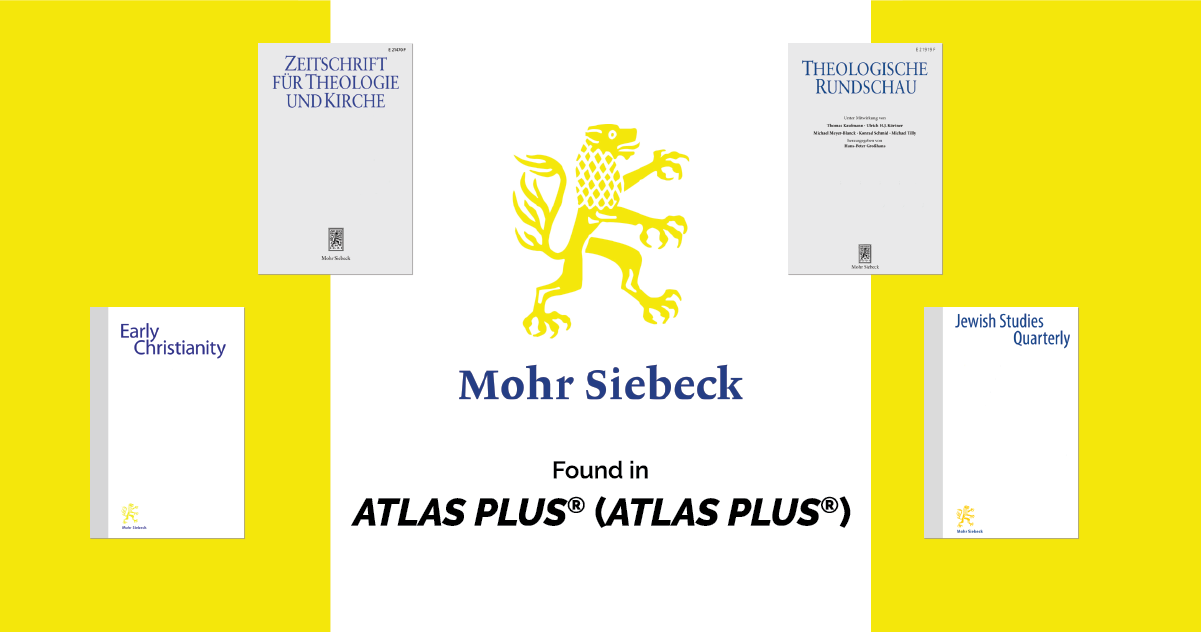 Tübingen, Germany-based Mohr Siebeck has been a leader in the academic publishing world since 1801. With a focus on humanities and social sciences, their content is a go-to for scholars in fields such as law, economics, history, and fortunately for ATLA, theology. They publish robust subject lists every year via books and series and also have an extensive journal list covering everything from Classics to Cultural Studies. In the increasingly competitive academic journal market, Mohr Siebeck content has thrived. They have produced some of the most enduring journals in this space and continue to establish new ones–particularly since 2000–as the need for subject coverage expands.

We at ATLA have been lucky to work with Mohr Siebeck for many years. They are a regular exhibitor at ATLA conferences and directors from the ATLA offices have visited their headquarters while in Germany. Their journals in the field of religion and theology are highly respected and sought after by scholars in our field. We index seven of their titles and currently license four in ATLASerials PLUS®  (ATLAS PLUS®) as full-text from the Theology, Jewish Studies, and Religious Studies lists, respectively.

We are grateful for this collaboration with Mohr Siebeck and know our users are too. More information about each full-text title can be found below.

Started in 2010, this journal is concerned with the first and second centuries of Christianity as a historical phenomenon. Collecting scholarship from around the world, the journal aims to cover the “kaleidoscopic range of individual phenomena, including communal structures, social norms, discursive practices, points of conflict, material remains, and much else” that surround early Christianity. Its goal is to highlight real-world impact beyond the New Testament as a text and a concept, shedding new light on the field from a variety of perspectives. It is published quarterly.

JSQ has been in print since 1993 and is edited out of Princeton University. A prominent voice in the field of Jewish studies, the journal contains scholarship on Jewish history, religion, and culture. Issues are occasionally centered around special themes and cover multidisciplinary topics including “any relevant subject, historical period, text or thinker in the study of Judaism.” It is published quarterly.

One of the oldest theology journals still in print, Theologische Rundschau (Theological Review), was originally founded in 1897 to “to bridge the gap between academic theology and practical church life.” Unaffiliated to any tradition, it holds a space in scholarship that has is both highly sought after and constantly evolving. Re-founded in 1929 after a hiatus, its objective is to “inform all those interested in theological work by providing collective reports and sporadic single reviews of research results and current problems in all areas of theology.” Collating research from an international body of authors, the journal scope is both universal and specific, giving it a place of distinction in the discipline. It is published quarterly.

ZThK beats out its compatriot Theologische Rundschau for the oldest religion title on Mohr Siebeck’s list, coming in at 128 years in print. Founded in 1891 and published entirely in German, ZThK’s focus is theological research as it relates to the teachings of the church. Rather than an analysis of historical context, its goal is to be current in the discussions surrounding this subject area today. It is unique in that it is addressed to anyone in this area of study from students to clergy and academics to teachers. The journal accepts articles and submissions from all theological disciplines, with a focus on issues and reflections in the Christian practice. It is published quarterly.

All four of these Mohr Siebeck titles can be found in full text on ATLAS PLUS. In addition, the following three titles are indexed via ATLA Religion Database® (ATLA RDB®):

Learn more about accessing these journals.

*ALL QUOTATIONS HAVE BEEN PULLED FROM THE MOHR SIEBECK WEBSITE: HTTPS://0-www-mohrsiebeck-com.librarycatalog.vts.edu/EN