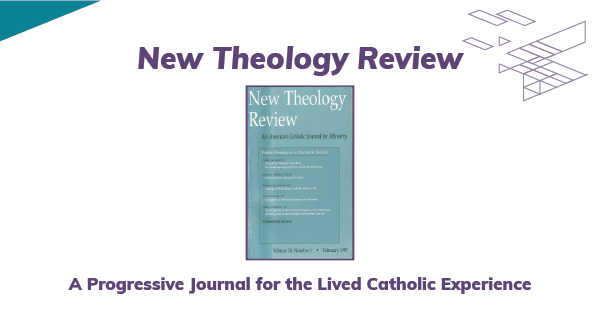 NTR was jointly run by the faculties of Washington Theological Union and Catholic Theological Union until it ceased its publication in 2018. With academic depth and a pastoral bent, during its lifetime NTR reached thousands of scholars around the world and continues to do so through its inclusion in AtlaSerials® (Atlas®). Atla Product Specialist Cristina Ochoa had the honor of speaking with three individuals who dedicated many years of their professional and personal lives to sustaining and expanding the life and work of New Theology Review: Dawn M. Nothwehr, OSF, Donald Senior, C.P., and Melody Layton McMahon.

Vincent Cushing, O.F.M., a well-known figure in theological education and third President at WTU, collaborated with Donald Senior, C.P. to launch New Theology Review. Both leaders had a strong interest in faculty, and a lot of younger faculty whose fields were particularly oriented to ministry, rather than an abstract approach to theology, had very little opportunity to publish their work. Cushing had a similar experience at WTU, and thus a similar need. Faculties at both institutions had been expressing their desire to produce and disseminate their ideas to the broader public.

With a vision for the journal established, sights were set on infrastructure.

The Lilly Endowment has historically been a major proponent of theological education, supporting religion as a unifier for society. Vincent Cushing, O.F.M., and former president of Washington Theological Union, offered to partner with Lilly to use their financial support to bring together various Catholic school faculties. Both sponsored by religious orders, Catholic Theological Union in Chicago and Washington Theological Union in Washington, D.C., had very similar structures, interests, and connections within the field, so theirs made a natural pairing. As the glue between the two institutions, the Lilly Endowment was tremendously supportive and thoughtful as a funding partner.

With the Lilly Endowment Grant funding, WTU and CTU were entrusted to bring together their faculties to discuss pedagogy and create a publishing outlet for religious scholars that wasn’t purely academic. The endeavor was intentional and well-planned, both because of both institutions’ clear vision, as well as Lilly’s robust experience in designing constructive, accountable, and effective programs.

WTU and CTU then joined forces with Liturgical Press, the Catholic and ecumenical publishing house of Saint John’s Abbey, to publish the journal. NTR had a joint editorial board with faculty from both schools, and the editor in chief alternated every three to four years. Each school also budgeted a small sum to support the journal, in addition to any subscription fees. All faculty members of both theological unions took turns serving on the board.

In the late 1980s, there was a gap in publishing outlets in the US Catholic world. New Theology Review was created in an attempt to fill that gap, as a service to the Catholic theological community.

Founded in a post–Vatican II era, the roots of the journal were firmly planted in academia, but the branches grew out to cover topics related to pastoral ministry and the life of the church. It was a model working to bring to bear theological and biblical scholarship in the lived Catholic experience.

Generally, there was no censorship of the topics covered in the journal, which allowed the faculties of WTU and CTU to work collaboratively, invoke an expansive editorial vision, and publish cutting edge scholarship in theology. What did they cover? “Name a theological discipline,” says Senior. Any topic from ecological sin, to youth ministry, to theology and disability, to racism. With a mission statement that is to “take top scholars of theology and translate their work into palatable vocabulary and applicable theology,” topics such as these were natural inclusions.

So many times people have the idea of theologians as being in their own world, and this journal is an example that it’s made for people in the pew. There is a way to bring some of these key pieces of theology home to the real life of real people in real circumstances.

Both Catholic Theological Union and Washington Theological Union had reputations of being forward-looking and progressive. There weren’t any journals doing the kind of scholarship that NTR did at the time; it brought its particular brand of Catholicism to the environment.

After two decades of successful publication, in 2008, Melody McMahon joined the faculty at CTU. At this point, Washington Theological Union was closing and therefore withdrew their support and affiliation to the journal. Liturgical Press also decided to not renew their publishing contract.

Seeing the changing landscape in academic publishing and taking into considering the personal constraints of WTU and CTU, McMahon immediately embarked on her open access initiative.

The first step for New Theology Review was to get the CTU faculty to buy into the value of open access. Since McMahon had long been an OA advocate, it came as no surprise to the faculty when she advocated to resume NTR’s publication as an OA journal. Melody quickly gained the faculty’s full support.

CTU is comprised of corporate members that are made up of religious orders that are mostly missionary organizations. Their work and their students who attend CTU are international. The faulty was acutely aware of the hardships that students were facing upon graduating, needing access to reliable scholarship. Moving the journal to a completely online, open access format opened it up to a more global audience, benefiting an international range of students.

To me personally, open access is one way that this democratization could happen, not the only way and not the most important way, but a way… Stories and using your imagination are what a Christian life is about. I do my best to live that way.

McMahon spent a considerable amount of time mentoring and educating scholars to convince their peers, professors, and others that open access scholarship was legitimate scholarship. Fortunate to have colleagues who were also forward-looking, that synergy, along with the congruence of institutional development, all sparked the dedication to the open access initiative that allowed New Theology Review to continue on.

A major influence of McMahon’s advocacy for open access was a theological interest in the Eastern Orthodox idea of theosis: the idea that we are supposed to be growing to be like God. Over the years, she had adopted this principle in conjunction with the idea of the democratization of scholarship.

In the late aughts, after Washington Theological Union could no longer afford to invest in NTR and Liturgical Press did not have the infrastructure necessary for the switch to open access, Catholic Theological Union became the sole sponsor. In 1999, almost 40 faculty were involved with New Theology Review. By 2018, there were less than 20, trying to manage the same level of coursework and teaching.

These shifting priorities, tightening of faculty bandwidth, and diminished institutional funding were factors in the decision to end production of New Theology Review.

At its height, New Theology Review had a 1,200+ readership. It was a well-established journal with a good reputation and stellar quality scholarship.

Although publication ceased in 2018, the theological scholarship remains relevant to persistent issues in society. Dawn M. Nothwehr still assigns NTR articles because of the insightful authors and cutting-edge theology that she says has become increasingly relevant as the Church has lived into the reforms of the Second Vatican Council. “You can trace the themes throughout the history of New Theology Review that were also publishing church-wide for a pastoral audience. You can follow important theologians’ thoughts through the backfiles of New Theology Review. As people study for their PhD exams, they will study the issues of NTR,” she says.

The legacy is the content. The idea of encouraging publishing.

In most Catholic seminaries, faculty often have many hats they are wearing, and there often aren’t a lot of opportunities or incentives to publish. As a scholar, having an outlet like NTR keeps a higher level of engagement. It allows an individual to deepen their scholarship and their teaching. It helps enhance the field and push it forward.

All indexing and back issues of New Theology Review will be available this February in Atla Religion Database® (Atla RDB®) and AtlaSerials® (Atlas®).

This post is an ongoing quarterly series highlighting ceased journals that have an enduring scholarly legacy. Learn more about the work Atla is doing to include these titles in our research tools.

A Sign of the Times: The Life of Sisters Today

Sisters Today was the longest-running chronicle of women’s consecrated religious life in North America. Their legacy is preserved in Atla Religion Database and Atlas PLUS.
Post

Learn all about the history, scope, and legacy of the Journal for Christian Theological Research, a ceased journal in AtlaSerials PLUS® (Atlas PLUS®).