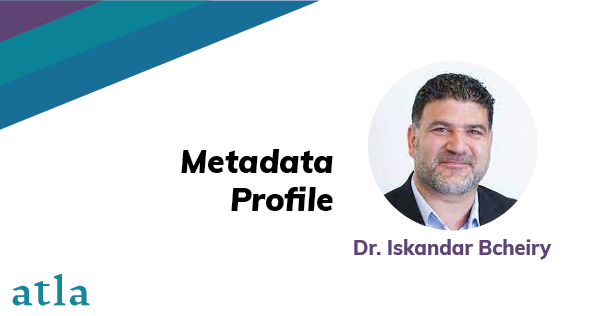 One of the key features of Atla’s research tools that sets us apart from others in the religion and theology academic space is the expertise of our metadata analysts and editors. Metadata analysts and editors are responsible for indexing the publications before they are added to our research tools, reading through them carefully in their original languages, and pulling the most vital data for our index so that the publications can be properly organized. The Atla Metadata Team has ten indexers with graduate degrees in theology, religious studies, history, anthropology, philosophy, literature and languages, and the social sciences. Many also index areas of personal interest or research, such as sacred music or archeology. The team indexes in more than forty languages in total. Their expertise ensures that Atla can manage an extremely broad array of content at the highest level. Given the wide and varied accomplishments of the members of this team and their importance to our work, we have begun a regular feature on this blog in which we profile our metadata analysts and highlight some of the titles they are most excited about. This month, we will feature Dr. Iskandar Bcheiry.

Dr. Bcheiry was born and raised in Lebanon until age 13, when he moved to Syria to join the Syriac Orthodox Patriarchal Seminary in Damascus, where he spent five years studying all aspects of the Syriac Orthodox Christian faith. Following this study, he moved back to Lebanon and spent another five years studying with the Holy Spirit University of Kaslik, earning his bachelor’s degree in Theology. After studying there, he spent six years in Rome, completing his master’s and a doctorate in Ecclesiastic Sciences and Church History at the Pontifical Oriental Institute. His studies then brought him to Chicago, where he completed another doctorate in World Christianity and Global Missions-Christian-Muslim studies at the Lutheran School of Theology.

Through the Lutheran School of Theology, Dr. Bcheiry learned of Atla and came to join us as a metadata editor, where he has held his position for seven years. In his work with Atla, he is tasked with indexing various works. His major areas of focus over recent years have involved texts on the subject of the Islamic tradition and all aspects of Islamic study, Syriac Christianity and other branches of Middle Eastern Christianity, relations between Christianity and Islam, Arabic study, and works related to the countries of the Mediterranean Sea and North Africa while also indexing works in other areas as the need arises.

The languages he indexes include, but are not limited to, English, Arabic, Aramaic, Syriac, French, Italian, Urdu, Hebrew, Turkish, and Persian. Many of these languages were learned on the job for Dr. Bcheiry, and he points to Urdu and Persian as two he has improved upon through his work with Atla in the last few years. If the work he is tasked to index is in a language he does not speak, he learns the language, often building upon the languages he has already learned to teach himself a related language. His gift for doing so has been invaluable in helping to build the topics and languages of coverage in Atla’s research tools.

His gift for doing so has been invaluable in helping to build the topics and languages of coverage in Atla’s research tools.

Outside of his work with Atla, Dr. Bcheiry is a widely respected and published scholar. He has authored several books on the topics of Christian and Muslim relations as well as the history of the Syriac Christian church. He has also published numerous peer-reviewed articles on the history of Syriac Christianity and cataloged several collections of Syriac and Arabic manuscripts. He is working on a collection for the Oriental Institute Museum in Chicago. He has cataloged collections for the Hill Museum at St. John University, the New York Public Library, the Mekhaterist congregation of St. Lazar in Venice, Italy, and Trinity College in Dublin, Ireland.

Dr. Bcheiry shared that he views Atla’s place in the area of religious study as being a facilitator and communicator of research to the scholarly world. The expertise of our metadata team allows the vast amount of research available to a student to be distilled into its most vital parts. He credits his work as a priest with helping him to consider the works he reviews not just on an intellectual level but also on a practical one, as his experience dealing with his congregants on a day-to-day basis shows what issues are at the forefront of the minds of religious practitioners. His passion for this work drives him to continue to learn and grow, and Atla and our readers are the beneficiaries of this passion.

His passion for this work drives him to continue to learn and grow, and Atla and our readers are the beneficiaries of this passion.

Dr. Bcheiry pointed to several recently indexed titles within Atla Religion Database® that he would like to highlight, including:

Other published works by Dr. Iskandar Bcheiry include the following book collections:

As well as articles in the following peer-reviewed publications:

Look out for future installments that will profile our other metadata analysts and the works they index. We also invite you to let us know about subjects you’d like to read about in the future.

More information about coverage and how to access Atla’s trusted research tools on religion and theology here: https://0-www-atla-com.librarycatalog.vts.edu/research/

You can find full title lists, updated monthly, for all our products at the following link: https://0-www-atla-com.librarycatalog.vts.edu/research/title-lists/

For more information on how content is evaluated and to learn how to recommend a title for inclusion in Atla’s research tools: https://0-www-atla-com.librarycatalog.vts.edu/for-publishers/evaluation-rdb/

Learn more about Nanzan University and their titles found in Atla Religion Database® (Atla RDB®), AtlaSerials® (Atlas®), and  AtlaSerials PLUS® (Atlas PLUS®).