Skip to main content
Close
BlogList of Endowments to Churches and Monasteries in Anatolia and to The Holy Sepulchre in Jerusalem Through the 16th and 18th Centuries: The Syriac Manuscript of Mardin 248
Toggle font size
Post

List of Endowments to Churches and Monasteries in Anatolia and to The Holy Sepulchre in Jerusalem Through the 16th and 18th Centuries: The Syriac Manuscript of Mardin 248

The library of the Church of Forty Martyrs, belonging to the Syriac Orthodox in Mardin, South-East Turkey currently owns an unpublished historical register in Syriac, containing list of endowments and donations to local monasteries in Anatolia and to the Church of the Holy Sepulchre in Jerusalem during the Turkmen principalities and Ottoman period. In the Ottoman Empire, Syriacs kept their own baptismal, marriage, funeral, endowments and other records, but not all these have survived. Some of these records can be found in various libraries, churches, and monasteries in the West and East, with a large concentration in Mardin, which was once the spiritual headquarters of the Syriac Christians and their patriarchate.

The Syriac manuscript found in the Forty Martyrs’ Church in Mardin, number 248/7, 21×15 cm, 100 leaves, black ink, Serṭō script, contains lists of endowments that were collected from older sources and copied into this register in the second half of the 19th century. This manuscript is particularly interesting because it offers information from the period between the sixteenth century and the middle of the eighteenth century. Thus, it casts light on this period of the Syriac Orthodox Church history for which documents are scarce.

In addition, this register is important from both a topographic and demographic aspect. The Syriac community as well as many other Christian communities was subject to demographic changes which occurred in Anatolia and Syria especially under the Ottoman dominion. Many villages and towns were depopulated and others were rebuilt due to emigration or deportation. This historical document serves as sort of a measurement to gauge the presence of the Syriac community in certain areas in South East Anatolia and Syria during the Ottoman Period in a way that we can note what changed and what remained. This is possible when we compare the data found in our document with facts and information from other periods before or after, which belong to other sources.

This document also increases our knowledge about the social and economic life of the local people through the amount and type of their donations. Furthermore, the names of the donors and their families show an interesting cultural and social fact. The personal names recorded in this list seem to reflect a community with strong religious tendency. Most of the names used by the inhabitants are either the names of Biblical personages or Church Saints. The most common of these names are Simon, John, Jacob, Daniel, Elijah, Joshua, Matthew, Thomas, Ephrem, Barsoum, Samuel, Michael, Paul, Peter, Mark, George, Stephen. Such collection of names points to a Christian religious community, at the same time it indicates the ethnic background. Also we notice male devotional forms of names by pacing ‛Abd “servant” before one of the “Hundred Names of God” or before Christian terms to make names like ‛Abd Allāh “servant of Allah” ‛Abd al-Ahad “servant of the Sunday”, or ‛Abd al-Karīm “servant of the generous”.

Below I would like to present a table that contains a sample of data of information extracted from the historical register: 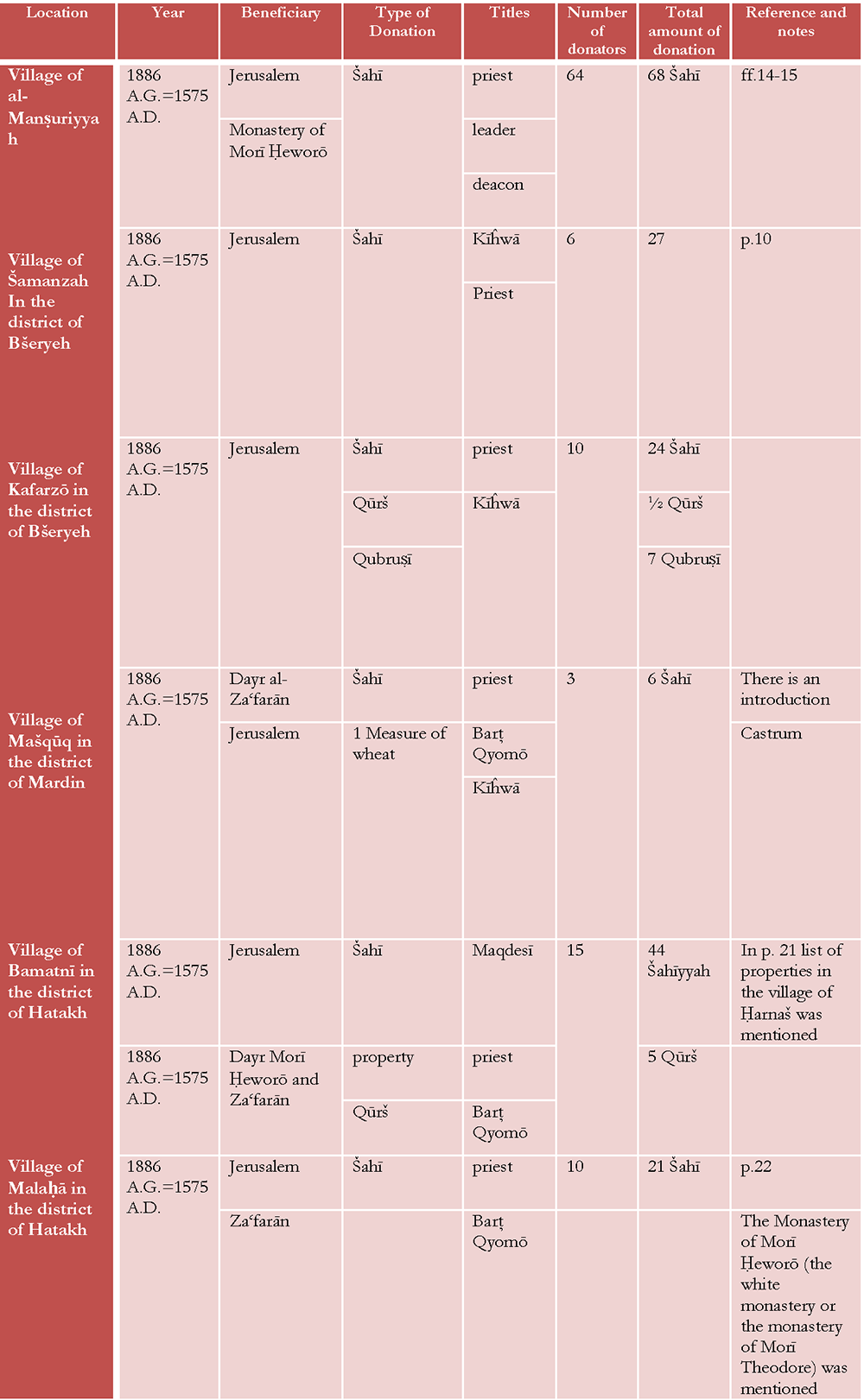