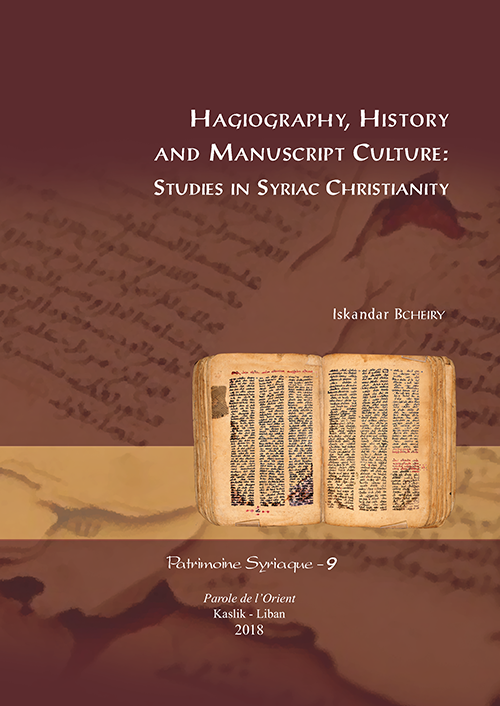 Iskandar Bcheiry, Metadata Analyst in the Production Department of ATLA, frequently publishes articles in the ATLA Newsletter on Syriac Orthodoxy. We are excited to announce his recent publication Hagiography, History, and Manuscript Culture: Studies in Syriac Christianity (ISBN 978-9953-0-4502-3) in the 9th volume of the Patrimoine Syriaque. In this issue, Iskandar presents a collection of three essays on Syriac historical studies. The first is The Discourse on Severus of Antioch by the Syriac Orthodox Patriarch, Cyriacus of Takrit (793-817). This biography is an important historical source that has been cited often; however, the text has never been published or translated. In this volume, Iskandar presents for the first time the Syriac text followed by an English translation of the biography of Severus of Antioch.

In addition, the publication includes another two historical essays in relation to the Syriac community during the 16th and 17th centuries. The first of these two essays, The Echoes of the Great Ğelālī Rebellion in Anatolia (1590-1611) through Syriac Sources deals with the social and political situation in southeast Anatolia from the perspective of the Syriac Christian community. This study relies on different types of historical sources such as colophons, historical notices, and marginalia.

The second essay is Historical Data Extracted from the Register of Endowments to Churches and Monasteries in Anatolia and to the Holy Sepulcher in Jerusalem through the 16th and 18th Centuries. These extracted data would support scholars with additional historical information that are related to the social, agricultural, and religious aspects of that period. The importance of the last essay is that it gives informs researchers about the social history of a local community in Anatolia from the bottom-up.

Iskandar would like to express his gratitude to Mr. Barnaby Hughes, a colleague at ATLA, for the care with which he reviewed the English language of the text of the essays.