Bringing Australasian Scholarship to the World: The Legacy of Pacifica 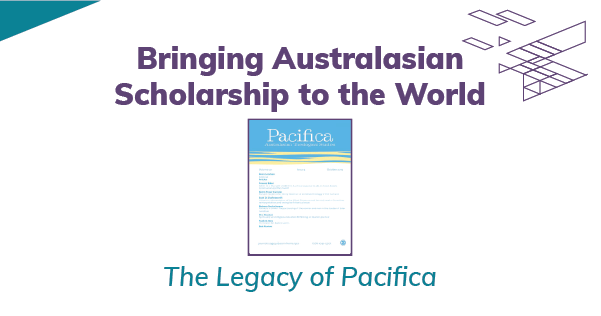 This is the first in an ongoing quarterly series highlighting ceased journals that have an enduring scholarly legacy. Learn more about the work Atla is doing to include these titles in our research tools.

Over thirty years ago, a group of theologians met at Catholic Theological College (CTC) in Melbourne to discuss the future of their college publication, Tolle Lege. After much deliberation and at the invitation of Norman Ford SDB, then Master of CTC, three notable scholars, John Honner SJ, Mark Coleridge, and Francis J. Moloney SDB AM, decided to create an entirely new journal utilizing the emerging technology of the time. Their goals were lofty: expand their reach outside of the Australian Catholic community; showcase Australian ecumenical scholarship being done abroad and at home; provide a forum for theologians of Australasia and the West Pacific Basin to showcase their unique contributions to the international Church and the international community of scholars; serve the needs of scholars and students. Much of the initial support for Pacifica came from individuals, communities, and various dioceses within the Catholic Church in Australia, but it didn’t take long for generous colleagues from traditions outside of the Roman Catholic church and around the world to enlist themselves in the cause.

Under the stewardship of John Honner, Mark Coleridge, Frank Moloney, and business manager Pamela Foulkes, operations quickly began with a small room rented at the Jesuit Theological College (JTC) in Melbourne, with nothing more than a photocopier, printer, and those lofty goals. Local and global promotion of the journal was made possible by the founders drawing on their connections and friendships, with requests to persuade their local theological libraries to subscribe and submit content. Many early subscriptions came from Catholic religious communities and parishes.

Several institutions played key roles in the early years of Pacifica. Most significantly, in 1992, the Melbourne College of Divinity (MCD) became the official sponsor of Pacifica. For a decade or so in Pacifica‘s middle years, the Sydney College of Divinity and the Auckland Consortium for Theological Education (ACTE) in New Zealand were also corporate sponsors for the journal, providing financial support alongside that given by the MCD. JTC continued to provide office and administrative support for many years.

In the 1990s, the multi-campus Australian Catholic University (ACU) was founded. Until the 1970s, theology in Australia was mostly undertaken in seminaries and theological colleges dedicated to the formation of ordained scholars and clergy members of various denominations. Increasingly, however, these institutions had begun to educate women and men not destined for orders. ACU provided academic pathways for these promising scholars, and eventually, many of them were able to find in Pacifica a reputable academic home for their early publications. Throughout its history, Pacifica also provided a publishing outlet for women’s voices in theology, especially those from Australasia, encouraging a new generation of scholars to publish their research.

It was at the founding meeting in 1986 where it was decided Pacifica should fulfill a complex set of paradoxes. It should be both scholarly and practical, Australian and international, Catholic and ecumenical, targeting both a scholarly and pastoral readership. The journal was to produce only three issues every year, due to founders wanting to ensure both the quality of the journal and to protect the resources of their lean operation.

Beginning publication in 1988, Pacifica produced thirty volumes throughout its history before ceasing publication in 2017. They remained under the sponsorship of Melbourne College of Divinity until 2012, and in 2013, Pacifica transitioned its ownership and operation to the University of Divinity. In that same year, Pacifica partnered with SAGE Publishing in order to transition its production process online as well as create an electronic version of the journal.

Throughout its thirty-volume history, many individuals from the University of Divinity community were associated with Pacifica‘s production, as authors, reviewers, editors, and members of its Executive Committee. Brendan Byrne SJ FAHA was the initial review editor until 1992, in addition to being Editor in Chief for eleven years from 2000-2010. In 2010, the journal achieved an “A” rating in the Excellence in Research in Australia journal rankings, placing it alongside journals like Novum Testamentum, Modern Theology, and the International Journal of Systematic Theology. In 2011, Sean Winter assumed the role of Editor in Chief and served until 2014, when Kevin Lenehan took over and managed the journal until its end in 2017.

The journal’s title, Pacifica, speaks not just of the vast ocean that surrounded its birthplace, but also of peace. The primary purpose of Pacifica was to help foster peace between peoples, churches, religions, and theological styles. Placed in a strategic geographic intersection, Pacifica hoped to be a meeting point where different voices might be heard, and where theology may be shaped to serve the Christian faith across the globe.

The University of Divinity worked hard to ensure that the legacy of Pacifica would be safeguarded through its partnership with Atla. All back issues are included in AtlaSerials PLUS® (Atlas PLUS®), so that they will remain discoverable by and available to an international readership, and so that Paciﬁca will continue to be a valuable reference for theological scholars and students. Content from Pacifica will continue to contribute to current research and help advance the study of religion and theology worldwide.

Learn how Atla’s in-house team is committed to seeking out historically significant publications, assisting in their preservation, and ensuring their scholarly significance persists.
Post

As Atla expands our open access content, we are providing unique benefits related to discovery, fulfillment, and stability for our publishers, researchers, and scholars.