ATS First Public Draft of Standards and Policies and Procedures 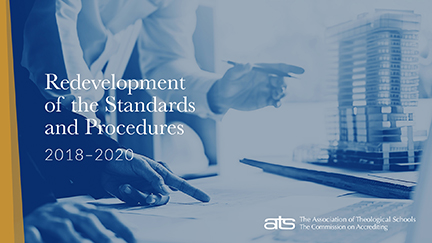 On December 2, the ATS Board of Commissioners released the First Public Draft of the Proposed ATS Commission Standards (text only version and annotated version) and the First Public Draft of the Proposed Policies and Procedures (annotated version). These drafts are in response to the membership’s unanimous vote at the June 2018 Biennial meeting to authorize the Board to undertake a redevelopment of the Standards and Policies and Procedures — the first major revision since 1996.

A nineteen-member task force appointed by the Board of Commissioners led the process to redevelop new Standards and Policies and Procedures, building upon the four-year work of the ATS Educational Models and Practices Project. This past year the task force engaged more than seven hundred ATS participants from nearly two hundred member schools, gathering more than a thousand member comments. They heard clearly the membership’s desire for a simpler set of standards focused on both educational quality and contextualized flexibility, as well as more streamlined accreditation processes.

The drafts released seek to address those membership desires by proposing standards and policies that focus more on general principles than prescriptive practices. As a result, the proposed Standards (text only) are much briefer than the current standards (eighteen pages vs. ninety-eight pages).  And the proposed Policies and Procedures are only thirty-five pages without annotations, compared to the seventy-five pages of Commission Procedures and Board Policy Manual that they replace; they also simplify many accreditation processes (e.g., by reducing the number of substantive changes requiring ATS approval and by proposing shorter self-study reports).

Librarians have had significant representation in the work of the task force.  Two Atla members sit on the task force itself (Mitzi Budde and Debbie Creamer), and information during the “year of listening” was gathered from librarians at the Atla annual meeting, various regional Atla meetings, a focus group of Atla board members and local library directors in Chicago, and feedback invited in the Atla Newsletter and an Atla webinar.

Among the proposed changes that came specifically from these listening sessions, you will notice that the standard on libraries (currently Standard 4, proposed Standard 6) is now proposed as “Library and Information Services” instead of “Library and Information Resources” and, in the overall framework of the standards, the section on libraries is now described as part of the “central core, focusing on student learning and formation and on those programs and personnel that most directly support student learning and formation” (from the cover page).

We Invite Your Feedback

These drafts are the first of three public drafts that seek feedback from the membership before they vote on a final draft at the June 2020 Biennial meeting in Vancouver. The task force has arranged for multiple ways for stakeholders (from ATS member schools as well as from the wider public) to provide input — all described on the ATS Redevelopment web page. One way you can let your voice be heard is by attending one of six regional sessions or one of two webinars scheduled for next February and March (registration information is here). Another way you can provide input on these drafts is by completing the brief survey at this link. And as always, you can just email your comments to the Redevelopment Task Force.

Redevelopment of the ATS Accreditation Standards: Your Input Requested!

As many ATLA members are likely already aware, the Association of Theological Schools (ATS) is currently engaging in a comprehensive…
Post

As previously mentioned, the Association of Theological Schools (ATS) is currently engaging in a comprehensive redevelopment of its accrediting Standards and Procedures. The current timeline for the redevelopment…