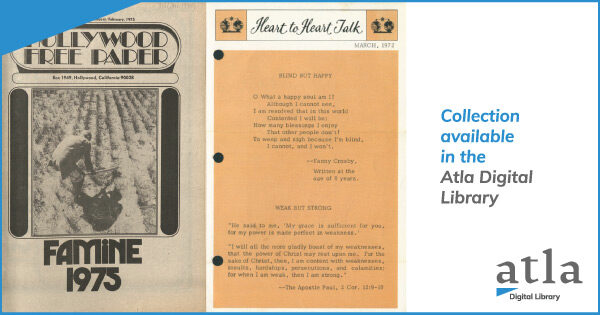 Explore highlights from these collections below.

The Charles E Fuller & the Old Fashioned Revival Hour collection is an almost complete digital collection of Charles Fuller’s radio program and its accompanying newsletters, Heart to Heart Talk. The programs consist of classic hymns from the choir and quartet, letters from listeners, and Dr. Fuller’s sermons. Its contents span the 1930s-1960s. They provide a window into American evangelical culture and concerns from those decades – including prohibition and life in the Great Depression, letters from the WWII front (Pacific and European), and the implications of the creation of the nation state of Israel.

You can see the full Charles Fuller and the Old Fashioned Revival Hour collection in the Atla Digital Library.

“They say it’s a movement made up of high school and college students, ex-dopers, some dropouts, and some who were never really in, in the first place. The press’ view isn’t quite accurate, though. The Jesus Movement actually began two thousand years ago….” (Pederson, Jesus People Magazine, 1972). Perhaps considered the major Christian element within the hippie counterculture, or the major hippie element within some strands of Protestantism, the 1970s spiritual revival known as the Jesus Movement defined a generation. Coffeehouse meetings, underground newspapers, and rock and roll became forces for the Christian gospel message.

You can see the full Duane Pederson, the Hollywood Free Paper, and Jesus People Movement Collection collection in the Atla Digital Library.

This digital collection features Dr. Lloyd John Ogilvie’s sermons from the “Let God Love You” television program (1978-1994). Dr. Ogilvie’s consistent ministerial focus has been the care, encouragement, and support of business, political, and community leaders. His many efforts include ministering for twenty-three years as pastor of the historical First Presbyterian Church of Hollywood (1972-1995), leading the nationally syndicated radio and television ministry called “Let God Love You,” and serving as the 61st Chaplain of the United States Senate (1995-2003). Dr. Ogilvie has also supported Fuller Seminary in countless ways, including (but not limited to) as a Board of Trustees member, a leader of the Lloyd John Ogilvie Institute of Preaching, and a valued colleague of former President David Allan Hubbard, former President Richard Mouw, and current President Mark Labberton.

You can see the full Ogilvie Sermon Archives – Let God Love You collection in the Atla Digital Library.

The Atla Digital Library brings together in a singular, searchable platform digitized collections from libraries, religious institutions, and other organizations worldwide who collect and preserve texts, records, maps, photographs, recordings, and other materials. The items found in the Atla Digital Library are of importance to those with an interest in researching, studying, teaching, and otherwise searching for historical and archival content in religion and theology. Learn more on how to become a contributing institution.

Check out all of the over 125,000 works in the Atla Digital Library.

The Atla Digital Library is expanding with new collections, initiatives, and opportunities. Learn more on how to get involved!
Post

Please join us in welcoming Atlanta University Center Robert W. Woodruff Library as the newest contributor to the Atla Digital Library. Check out this sample from the collection.