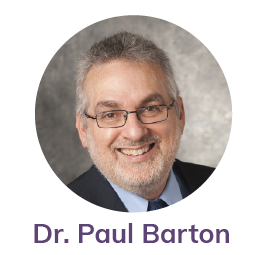 Nearing a move to another position, Dr. Barton shared his personal history with Apuntes and the role it has played in the academic landscape of religion and theology.

In the second half of the twentieth century, Dr. Paul Barton’s father, Roy D. Barton, perceived a need to provide theological reflection for and by Hispanic churches, theologians, and pastors in the United States. Up until that time, there were no academic journals addressing this topic. As a result, Roy Barton assembled a group of advisors, most notably including Justo González, Cuban-American United Methodist historian and theologian and influential contributor to the development of Hispanic theology.

In 1980, Apuntes: Reflexiones teológicas desde el contexto Hispano-Latin@ was launched with Roy Barton as founding publisher and Dr. Justo González as founding editor. The early team sought out the United Methodist Publishing House to do the printing and distribution of journals, which continued to be the arrangement until just last year.

Formerly known as The Mexican-American Program at SMU Perkins School of Theology, the Hispanic/Latin@ Ministries Program is the host program for Apuntes. With an ecumenical editorial board, the journal seeks to transcend the traditional border between academic research and the ministry of the church, producing bilingual scholarship useful for academics, professors, and seminary students, as well as practitioners. The journal also seeks to transcend physical and imposed borders contextually relevant to the issues and realities of the Latinx community across the United States and Latin America.

The journal also seeks to transcend physical and imposed borders contextually relevant to the issues and realities of the Latinx community across the United States and Latin America.

Apuntes has a very important part to play in the academic landscape of religion and theology purely by the fact that it presents a Hispanic/Latin@ theological perspective, providing a platform for associated individuals to publish their writings and thoughts. Before Apuntes was founded, most Latin@s were not able to get their work published in academic journals.

Back when Dr. Barton started his career, there were but a handful of Hispanic/Latin@ students at US seminaries and schools of theology. Often, the established, peer-reviewed scholarship outlets were inaccessible to them.

In Dr. Barton’s words, “These scholars had great wisdom and knowledge. They may not have had a PhD, but they still should be able to share their knowledge and wisdom with everyone else.”

'Apuntes' has a very important part to play in the academic landscape of religion and theology purely by the fact that it presents a Hispanic/Latin@ theological perspective, providing a platform for associated individuals to publish their writings and thoughts.

In 2018, SMU Perkins started a Spanish language cohort for their Master of Theological Studies (MTS) program. More than half of the cohort members were from Latin America, several of whom were published in Apuntes. Typically, as mentioned, scholars without graduate degrees have a difficult time getting published in peer-reviewed journals. Apuntes, however, provided these students with a venue to share their knowledge and their learning.

In the words of Dr. Barton, “It is definitely a non-traditional journal.”

Since Apuntes started in 1980, two Hispanic-Latin@ oriented journals have begun publication in the US, Journal of Hispanic/Latino Theology and Perspectivas.

The Hispanic/Latin@ Ministries Program (HLMP) was founded in 1974 to prepare church leaders with the knowledge and skills for effective ministry in Spanish-speaking and bilingual contexts and cultures. The program remains committed to recruiting, preparing, and providing continuing education for people in ministry with Hispanics/Latin@s. HLMP also works as a vital advocate before the general church with and on behalf of Hispanic/Latin@ congregations and ministries.

In a sentence, the mission is to equip and educate the church to engage Latin@ communities for mutual transformation.  Apuntes was formed as the heart of HLMP and the vibrant center of vital Hispanic/Latin@ theological thought and writing.

Since becoming director of the program and publisher of Apuntes (a set dual role), Dr. Barton has dedicated the editorial staff to publishing more intentionally thematic issues, being proactive in seeking out new authors and new content for each issue. The articles included are written by scholars and practitioners of ministry across the United States and Latin America and read by the same audiences.

In a sentence, the mission is to equip and educate the church to engage Latin@ communities for mutual transformation.

For several years, the editorial board had considered becoming a primarily online journal but remained a print journal with the compromise of establishing a relationship with Atla so that readers could have greater digital access to the high-quality scholarship in Apuntes.

September 2020 marked the 40th anniversary of Apuntes: Reflexiones teológicas desde el contexto Hispano-Latin@ and the work it has done to create a platform for individuals in theological education who normally would not have one.

Celebrating the Mission of Biblical Equality with ‘Priscilla Papers’

Join us in celebrating Women's History Month and learn about 'Priscilla Papers,' a journal devoted to gender equality through biblical interpretations.
Post

The Frontier Attitude of ‘Journal of Religion & Society’

Atla Product Specialist Cristina Ochoa “sat down” with Dr. Ronald A. Simkins to talk about the 'Journal of Religion & Society.'